Music & Tech: Talk to Me with Ryan Leslie 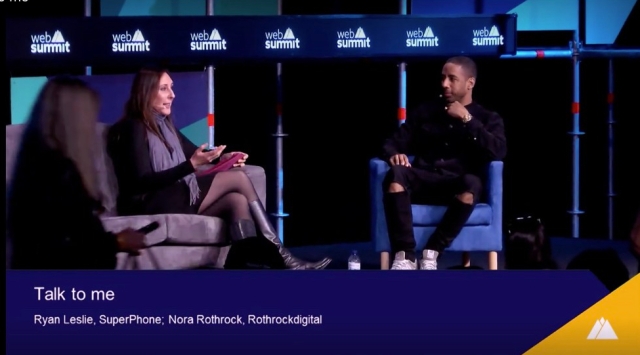 Passionate and brilliant – Ryan Leslie is not like other artists.  Understatement.  I had an amazing chat with Ryan at last year’s Web Summit in Lisbon.

Ryan Leslie is a Grammy nominated recording artist, multi-platinum producer, and now a tech entrepreneur with some impressive backing by people like Ben Horowitz. In addition to logging studio time with Madonna, Jay-Z, Kanye West, Britney Spears and Beyoncé, he launched the first internet pop star Cassie, who sold over 650K albums fueled by an aggressive pre-Twitter social media campaign on MySpace.

Like all great entrepreneurs, Ryan was looking to solve a problem.  In his case, he was looking for a way to connect more intimately with his fans and found the mainstream social media platforms of Facebook, Instagram, Twitter and Snapchat to be lacking in the ability to interact with someone 1 to 1.  He started giving out his phone number to everyone, but that had some obvious drawbacks.  This motivation became SuperPhone.

Did I mentioned he also got a perfect score of 1600 on his SATs and graduated at 19 from Harvard with a degree in Government?

Articulate, expansive and charismatic, here is my Talk to Me chat with Ryan Leslie at the Web Summit in Lisbon last year.

Talk to Me Interview with Ryan Leslie in HD on Facebook

Talk to Me with Ryan Leslie Excerpts on YouTube